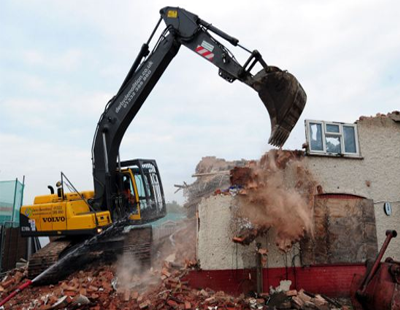 Two unauthorised outhouses have been demolished by Ealing Council after the landlord failed to comply with an enforcement notice.

Demolition of the substandard residences at the back of 201 Scotts Road in Southall took place over the weekend of 26 September.

Action was taken after the landlord, Mrs Nadeem, failed to comply with an enforcement notice that was served on her in the summer of 2014.

The buildings were first discovered in October 2013 after a concerned resident reported the planning breach to the council. Nadeem was subsequently served with the notice in 2014 that required her to stop using the outbuildings and to demolish them both by December 2014.

A formal warning was issued to Nadeem when the deadline passed with no remedial action being taken. She again failed to comply, leaving the council with no choice but to demolish the outhouses.

At the time of the demolition, the outbuildings were found to be in very poor condition with damp and no insulation. They were also being occupied by five people and a small child, despite Nadeem insisting the buildings were empty. The occupants have since found alternative accommodation.

Leader of the council Julian Bell said: “I am always astounded when I see and hear about the unacceptable conditions that landlords of unauthorised outbuildings expect tenants to live in. These illegal structures are substandard and do not meet the planning regulations that are in place to protect our residents and communities. They will not be tolerated and the council will take robust action where owners fail to comply with enforcement notices.”

Nadeem will get a bill for the full cost of the demolition works carried out by the council. If the bill is not settled a charge will be placed on the properties on site which will incur interest until the outstanding money is paid in full.

In addition to these two buildings, the council also took enforcement action in August to remove three illegal outhouses in East Acton, W3.

Two Southall landlords have been found guilty of failing to comply...

Another bed in shed landlord fined ...

A landlord who let tenants sleep in an outbuilding in Westcliff-on-Sea,...