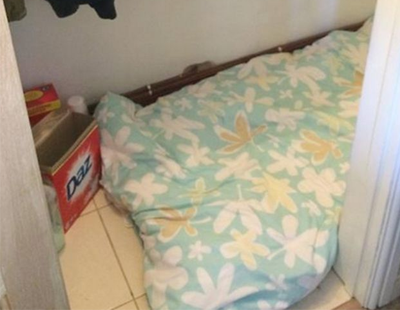 A rental property listing for a bedroom consisting of a mattress under the stairs has earned national notoriety after featuring in a number of national press reports.

The 'room', which was listed on london2let.com for £500 a month plus bills, received attention after a prospective tenant posted pictures of the cramped space on Twitter.

Twenty-three year-old Alex Lomax came down from Notthingham to view the flat-share in Clapham, south-west London.

She said she was shown the room by a landlord, who didn't apologise for its condition or size.

“I was shown the kitchen and the under-stairs cupboard - he seemed deadly serious, which is the worrying part,” she told the BBC website.

Lomax said she wished she had been more angry at the time as the offering was 'ridiculous'.

The landlord has not been named but the listing appears to have been removed from the london2let website.

Social media commentators have likened the 'room' to the cupboard under the stairs inhabited by Harry Potter in the J.K Rowling series.

Flatsharers increase their budgets to cope with rising rents ...

The average flatsharing tenant has increased their budget in order to...

A flat sharing website has claimed that London is on the...