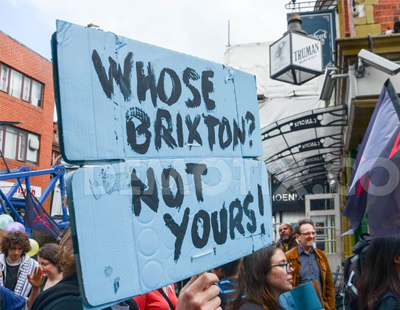 The window of Foxtons estate agent in Brixton was smashed on Saturday as trouble erupted at an initially peaceful process against gentrification in the area.

Lambeth Town hall was stormed and CS spray gas was used to deal with protesters at the police station.

The protest had been organised by “Reclaim Brixton” which campaigns against gentrification of the area. It says locals are being priced out of the housing market and smaller, individual businesses being driven out by high rents and big business.

A Facebook page for Saturday’s event said: “Brixton is widely known for its vibrancy, which is another word for social and cultural diversity. But Brixton's vibrancy now has a question mark on it. Will Brixton turn into a living museum or will it live?

“Earning less than £25,000? Or long-standing Afro-Caribbean resident? Maybe artist, musician? Shopkeeper? Librarian? Community worker? A teenage skater? A senior resident? A child who likes to play outside pens? Show the world your love for Brixton. The fight against gentrification starts here!!”

Initially a crowd of more than 1,000 people gathered in Windrush Square to wave placards and play music.

However, later in the afternoon Foxtons and Lambeth town hall both came under attack. One window was smashed at the estate agent and “yuppies out” sprayed on the other window.

Police officers arrested one person on suspicion of criminal damage.