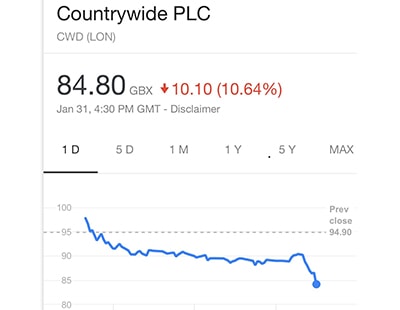 The Countrywide monthly Lettings Index for January has found that although rental growth is slowing, rents are now at their highest on record.

The index found that compared to the same month last year average rents in the UK rose 1.2% to £906 a month.

Although this represents the slowest increase in three years, average rents are 12% above their pre-recession peak, reaching the highest level on record.

Unsurprisingly, London has seen the largest growth in rents anywhere in the country since 2007, with rents 34% higher than their pre-recession record. Between 2007 and 2016 the average Londoner has seen their rent rise from £966 to £1,295 a month.

Despite the popular narrative of ever rising rents, over the past nine years the majority of the country has experienced rents growing steadily in line with incomes. Average income has increased by 12% since 2007 according to the ONS compared to a 12% increase in average rents.

However, inn London rents have grown well beyond incomes. Incomes have only increased by 10% since 2007 in the capital whilst rents have grown by 34% fuelled by a lack of supply and high demand. As a result tenants have had to either share, downsize or move further from the centre in order to accommodate this rise.

At current rates of rental growth the three regions where rents remain below their previous peak will see average rents surpass 2007 levels by the middle of 2016. In these regions landlords have increasingly looked to renegotiate with long term tenants, some of whom have enjoyed years without any increase in their rent. This January more landlords were able to increase the rent for tenants who renewed their contract in the North East, North West and Wales than at any time since 2012.

Commenting Johnny Morris, research director at Countrywide said: “Nationally rents in January rose at the slowest rate since 2012, as some of the upward pressure on prices subsided and affordability limited further rises. Across most of London and the South East the slowdown in rental growth is the first since 2010, where rents have been growing for the past six years.

“The most sustainable way of creating a more affordable rental market in London and the South is by building more homes of every tenure. Unlike in the US where institutional investors build homes to rent, in the UK the sector is dominated by small landlords meaning the link between new homes getting built and the rental market isn’t nearly as close as it should be.”

Rent price rises have slowed to match the pace of house...