A landlord who was jailed earlier this year after being found guilty of cultivating a cannabis crop of £75,000 in two rooms at one of his properties, has handed £40,000 over from his drugs operation.

James Sullivan, aged 61, claimed that he did not know that cannabis was being grown in the property, but passing police officers were able to detect the scent from the street outside the house in Plymouth.

The discovery of the 64 mature plants, which reached up to 4ft in height, saw Sullivan sentenced to three years in jail.

Sullivan, a former paratrooper, was previously accused of growing the crop of illegal plants, but he insisted that he ‘could not even grow a tomato’. Nevertheless, he was found guilty of growing cannabis between December 2012 and February 2013, and sentenced to four years in jail. But the Court of Appeal quashed the conviction ruling that the judge may have been unfair to the defendant during his summing up.

Reflecting on Sullivan’s most recent conviction, Judge Ian Lawrie, said: “You are a man of good character and what on Earth possessed you to get involved in criminal activity at this stage in your life, I do not know. But you are going to have to pay a heavy price.”

Landlords need to be wary of weed farms in their investment properties.

Landlords should always be attentive when viewing or inspecting rental properties in order to weed out tenants that may be growing cannabis in their properties.

Last year, police seized 456,911 plants across the UK, reflecting a sharp rise in home-based cannabis cultivation, according to Direct Line for Business, the landlord insurer provider. 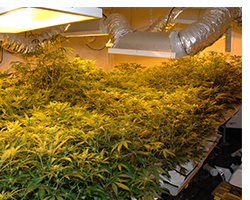 Police raids resulted in no fewer than 59,002 plants being seized in London, which was more than any other part of the country. Birmingham had the second worst record with West Midlands police confiscating 52,218 plants, while 33,547 plants were removed from homes in Greater Manchester.

Jane Guaschi, business manager at Direct Line for Business, said: “The consequences of a cannabis farm on a landlord’s property can be financially catastrophic. Landlords should check to see if their insurance policy covers them for malicious damage as it’s not just the structural damage that could have insurance implications, it’s the financial headache of the clean-up that will hurt the landlord’s back pocket. What’s more, landlords could face loss of rent and the stress of the legal wrangling during periods of repair or eviction.”

Cannabis Cost - this is how much landlords lose thanks to rogue tenants ...

An expert assessment of the average cost of damage caused by...