Rents on new tenancies rose across most parts of the UK over the three months to the end of April, led by gains in the East Midlands and Scotland, fresh figures show.

The latest data from the HomeLet Rental Index reveals that the cost of a new tenancy in the private rentals market in the UK, excluding Greater London, rose by 5.1% in the three months to April 2016 compared with the corresponding period 12 months earlier.

The rental data, the first to be released since higher stamp duty charges on buy-to-let rental property purchases were introduced on 1 April, show that rents on new tenancies continue to rise at a much faster rate than UK inflation.

According to the Index, rental price growth was led by Scotland, where rents rose by 11.4% year-on-year, followed by gains of 7.9% in the East Midlands and 7.7% in London.

The increase takes the average rent for new tenancies in the UK, excluding Greater London, to £764 per month. In Greater London it is £1,543 but the rate of growth remains below the double digit rises witnessed in 2015.

The Index reveals that rents on new tenancies increased in 11 out of 12 regions in the UK on an annual basis over the three months to April 2016. The only region not to record growth was the North West of England, where rents dropped by 1% over the three month period.

“The April HomeLet Rental Index has been much anticipated given the potential impact of the stamp duty changes on the private rental market; for now, however, rental price growth in most areas of the country is unchanged from the trends observed over almost three years,” said Martin Totty, chief executive of Barbon Insurance Group, HomeLet’s parent company.

“It may be that over the next several months, the trends observed in the rental market begin to reflect the signs of some slowdown in the rate of house price growth that we are now beginning to see and that will be something to watch closely,” he added. 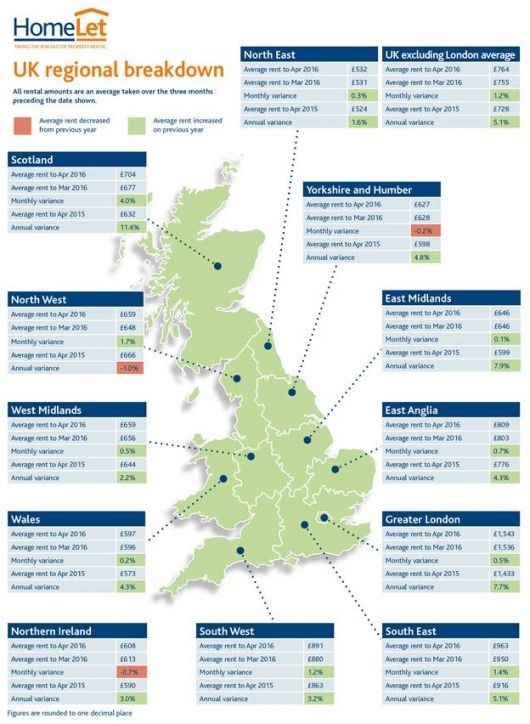