Over-extended student homes are not just an eyesore, but they are also ‘destroying family homes’ and creating ‘misery for local residents’, according to a Birmingham MP who says that he is determined to ‘put an end to this madness’.

Selly Oaks’s Labour MP Steve McCabe has accused the local council in the south-west Birmingham region of dragging its heels when it comes to dealing with cowboy developers who have blighted Selly Oak with over-extended student properties, including unauthorised extensions and developments.

The Birmingham MP has pledged to take on the ‘rogue landlords’ and ‘cowboy builders’ in his local area by tightening the laws around such development with his own Protection of Family Homes Bill, which is heading for a second reading in parliament in October.

McCabe (below left) is supporting calls from local residents and councillors to prevent more family homes being acquired by buy-to-let investors looking to convert them into student housing. 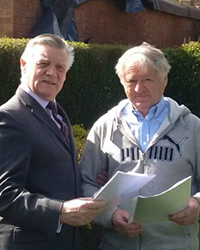 The MP said: “Residents in Selly Oak will be dealing with rubbish in the streets, obstructions, rows and rows of skips and more unsightly extensions this summer because of the consistent failure to take enforcement action against rogue developers.

“For the past three years, I have pushed the council's planning department to take action but developers continue to get away with what they want, ruining communities and neighbourhoods. How many more years do we have to wait?"

McCabe added that he is absolutely ‘determined’ to get his Bill into law.

“That is why I stayed up all-night to secure a slot for my Protection of Family Homes Bill,” he added. “It isn't easy getting a Bill off the ground as a backbench opposition MP but I will certainly do everything I can to put an end to this madness which is destroying family homes and creating misery for local residents.”

A Birmingham landlord has been handed a fine of more than...

Birmingham City Council has been instructed to pay a private landlord...