A Camden councillor who was prosecuted last year by the council he works for in north west London after failing to carry out improvement works to a rented property he owns in Primrose Hill has slammed the government for demonising landlords and effectively making them  ‘public enemy number one’.

Bucknell, who used to be Camden Conservatives’ spokesman for housing, and has been a councillor for Belsize Ward in Labour-run Camden since 2010, was fined £30,000 after admitting he failed to carry out timely improvements to the property he lets out.

The councillor and buy-to-let landlord was ordered to make improvements to his Primrose Hill flat in August 2014 but failed to comply with the improvement notice within the required period of time.

Bucknell (pictured below), who represented himself in court, said he initially intended to plead not guilty, but changed his mind at the last minute.

But he surprised delegates at a Conservative party conference meeting in Manchester last week when he accepted that he is “not an angel”, adding that he is “a rogue landlord” as he called on the government to slow down the number of landlords who find themselves in court.

According to the Camden New Journal, he said that he was pressured into pleading guilty amid warnings that legal costs would mount up. 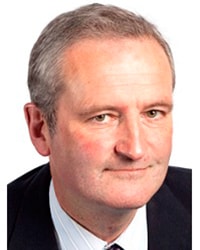 “I told them you do get people who don’t care but you sweep up the haphazard with the really guilty,” he told Conservative members. “Camden should never ever prosecute unless all attempts at reconciliation have failed.”

He added: “The guy [from the council] walked in and said: ‘Not much work been done here.’ I said: ‘I’ve started stripping the flat out with my own hands.’ As long as a job is moving and there is goodwill, they should take a pragmatic view."

"My closing line is you’ve made landlords public enemy number one. It used to be solicitors and bankers, now we are at the top.”

Tory councillor fined AGAIN for being a rogue landlord ...

A Conservative councillor has been ordered to pay more than £57,000...

Council urged to get tough on Airbnb-style rentals ...

A north London council is being encouraged to take a tough...