The annual rate of rental price inflation reached 1.1% in March, significantly lower than the UK consumer price index of 2.3% recorded last month, which is putting continuing pressure on real incomes.

Annual rental price growth has dropped from a high point of 4.7% in June 2016, with the reduction in the pace of rental price inflation most marked in areas of the country where rents were previously increasing fastest.

Rents in March rose in every area of the country apart from two when compared to February, with Yorkshire & Humberside and the North West of England as the sole fallers.

On an annual basis, rents were higher in March than a year previously in 11 out of 12 regions covered by HomeLet’s index, with the South East registering a marginal decline.

Martin Totty, chief executive of Barbon Insurance Group, HomeLet’s parent company, said: “In the current housing market, where demand for homes continues to outstrip supply and house prices are out of reach for many buyers, the long-term trend in the private rental sector is likely to be for rental price inflation to continue; however, the HomeLet Rental Index continues to reflect landlords’ focus on offering tenants affordable rents, with rents now increasing at a rate significantly below the general rate of inflation in the UK economy.” 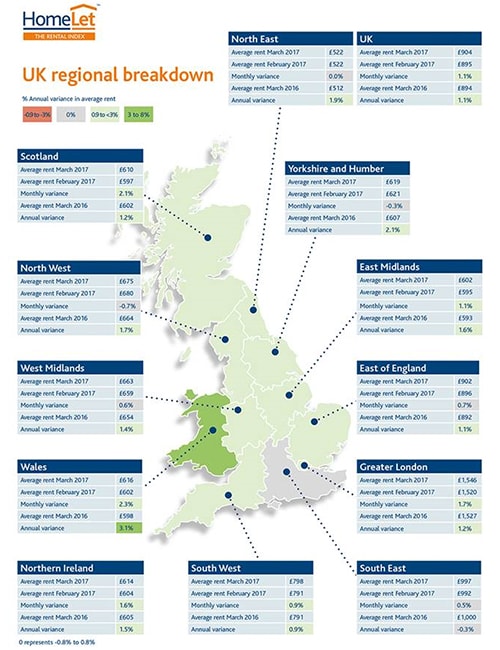