Landlord who put tenantsā lives in danger must pay Ā£21,500

There has been a significant fall in buy-to-let valuation activity, according to forecasts by Connells Survey & Valuation.

The proportion of buy-to-let valuations is 6% below the five-year average for April. Valuation activity last month was even lower than it was in April last year – when the stamp duty surcharge was introduced.

The proportion of valuation activity undertaken in the buy-to-let sector fell from 11% in April 2016 to just 7% in April 2017, following the reduction in mortgage tax relief.

As of 6 April - the start of the existing financial tax year - landlords are only permitted to offset 75% of mortgage interest payments against rental income, down from 100% in the previous tax year.

John Bagshaw, corporate services director of Connells Survey & Valuation, said: “The government’s anti-landlord policies have been hitting smaller players. Over the last year, buy-to-let valuations have made up less than 10% of market activity, representing a new low in April.

“This could suggest that smaller, private landlords, who typically use buy-to-let mortgages, have not been investing on the same scale as previously seen. Buy-to-let used to be seen as a viable way to gain additional income or to fund retirements, but the gradual removal of buy-to-let mortgage tax relief will make it much harder for the man on the street to invest.

“Having said that, buy-to-let valuations only fell 1% month-on-month and so the comparison with the five year average doesn’t always tell the whole story.” 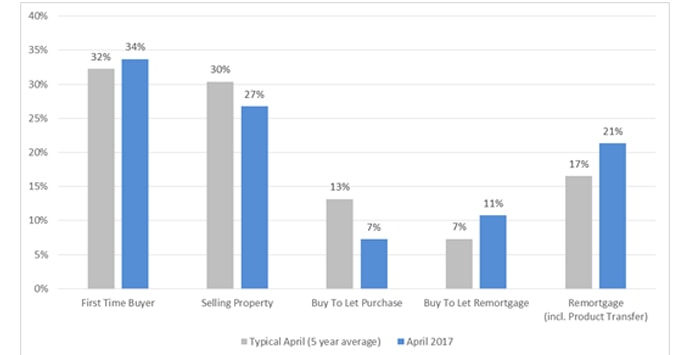 Although there was a fall in buy-to-let valuations as a proportion of market activity, the research from Connells Survey & Valuation did reveal that buy-to-let remortgaging increased by 4% above the five-year average for April, as landlords look to refinance.

Buy-to-let remortgaging is now responsible for 11% of total valuations in the market - a greater proportion of valuations than buy-to-let purchasing.

Bagshaw added: “With bigger tax bills, landlords will start to feel the squeeze. To offset some of the rising costs, landlords have been taking advantage of the lower remortgage rates on offer.

“As buy-to-let tax relief gradually disappears, remortgaging looks set to be an increasingly popular option with landlords as a way of retaining profitability.” 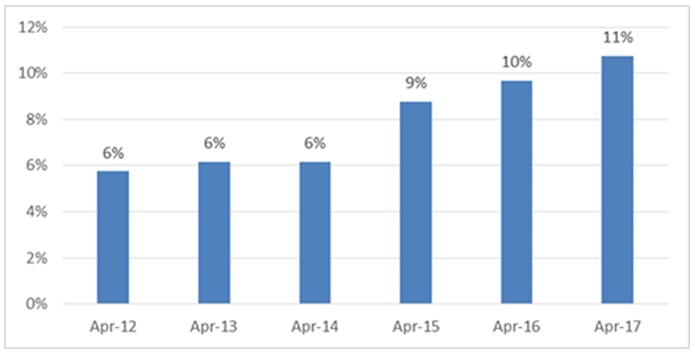 Buy-to-let remortgaging as a proportion of market activity

The buy-to-let sector is continuing to struggle with valuations contracting 26%...