Most single tenants renting privately in the capital are now paying more than half of their monthly salary on average to rent a one-bedroom property in the city, according to fresh analysis of the latest data from the Office of National Statistics (ONS).

The research, undertaken by Sellhousefast.uk, suggests that the average renter in London is in worse financial health than someone who owns their own property, with tenants forced to make significant cutbacks to meet their rental obligations, with the average rent for a one-bedroom property in London reaching almost £1,330 per month.

Analysis of the ONS’ data revealed that single tenant’s in 25 of London’s 32 boroughs are sacrificing more than 50% of their monthly salary - after income and council tax deductions - on rent for their one-bedroom property.

Unsurprisingly, housing affordability is more stretched in prime areas of the capital, with those renting a one-bedroom property in Kensington and Chelsea paying on rent the equivalent of 85% of the average monthly salary in the capital.

Single tenants in Bromley as well as Havering sacrifice the joint lowest percentage of their monthly salary on renting their one-bedroom home in London at 42%.

Robby Du Toit, managing director of Sell House Fast, commented: “As demand has consistently exceeded supply over the last few years, Londoner’s have unfortunately been caught up in a very competitive property market where prices haven’t always reflected fair value. This notion is demonstrated through this research whereby private rental prices in London are certainly overstretching single tenants; to the extent they must sacrifice over half their monthly salary.

“For those single tenants with ambitions to climb up the property ladder – their intentions are painfully jeopardised, as they can’t set aside a sufficient amount each month to save up for a deposit or explore better alternatives. It’s not only distressing for them but worrying for the property market as a whole – where the ‘generation rent’ notion is truly continuing too spiral further.” 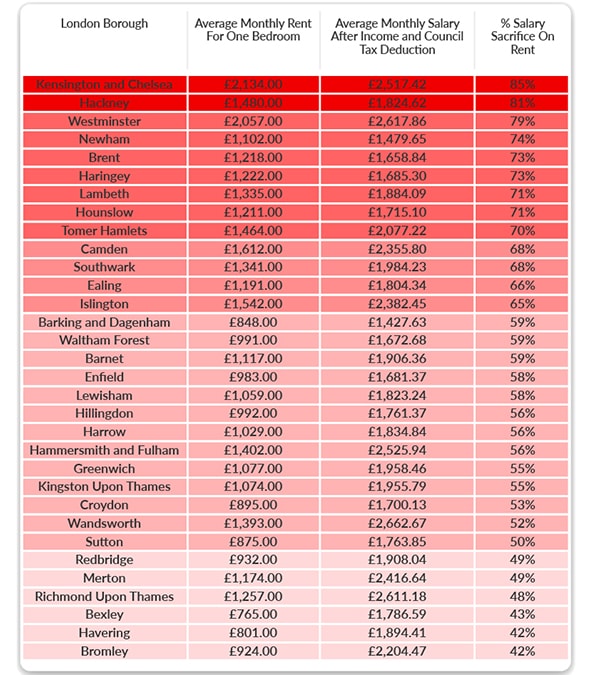 There has been a notable rise in the number of buy-to-let...