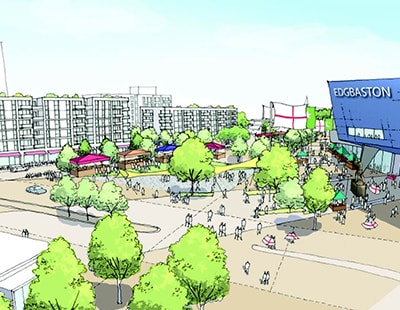 Plans have been unveiled for a development of 375 new Build to Rent (BTR) homes, as part of the proposed redevelopment of four acres of land around Edgbaston cricket ground in Birmingham, subject to planning and local consents.

International property investment group PATRIZIA UK and the Homes & Communities Agency want to develop the Build to Rent (BTR) homes as well as new shopping and catering opportunities with a GDV of circa £85m.

PATRIZIA’s acquisition of the land in south Birmingham builds on the company’s growing UK BTR platform, which includes a major mixed-use scheme in Manchester that is currently being delivered.

Located less than 10 minutes from the centre of Birmingham, the acquisition comprises two plots which will not just provide new homes for rent, as well as ground level retail units and resident’s parking, but a new access road will also be delivered as part of the plans for the site.

Tenants will also benefit from Birmingham’s new two-way, fully segregated cycle highway, which will run close-by to the scheme and connect it to the city centre.

The site is located adjacent to Edgbaston Stadium, home to Warwickshire County Cricket Club and Birmingham Bears, in addition to being one of the world’s most famous international cricket venues, while immediately opposite Edgbaston Stadium is Birmingham’s largest urban park and arts centre, along with the schools and sports clubs of Edgbaston.

The University of Birmingham, a Russell Group university with 22,500 students, is close-by, offering first class sporting facilities which are open to the public, including a recently opened Olympic-length swimming pool.

Also in the local area is the Queen Elizabeth Hospital, which employs 7,000 people and Life Science Park, a new £250m research campus development that will create 2,500 new jobs, all of which will support demand for good quality private rental accommodation.

James Muir, managing director at PATRIZIA UK & Ireland, said: “We set out with a clear strategy for our UK BTR platform which was to target urban centres with strong demographic fundamentals.

“Edgbaston is an established and thriving part of Birmingham, and this particular location has access to the best of the city, including sports, employment, entertainment and dining out. We are pleased to have agreed this plan with both Warwickshire County Cricket Club and the Homes and Communities Agency which is aligned with our commitment to build more UK homes.”

Karl Tupling, general manager at the Homes and Communities Agency, added: “Our partnership with PATRIZIA will help provide more homes for people in this popular area of Birmingham, and it is great to see a European investment manager investing in the UK housing market.”

RentPassport and DepositFree insurance trial to take place in Scotland ...

Canopy, the UK property rental market app has teamed up with...

A deranged tenant in Scarborough has been sentenced to 32 months...