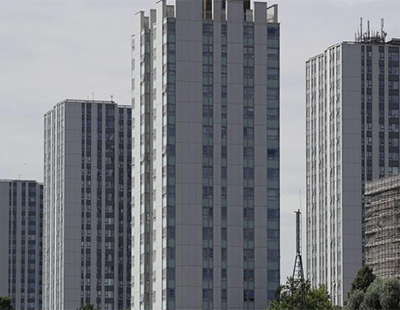 A crowdfunding page has been set up by concerned tenants who are looking to pay for an independent fire safety inspection to be carried out at their homes in north London.

More than 3,000 residents, including many private tenants, living on a housing estate in Camden were evacuated overnight in June after fire inspectors said four tower blocks were at risk following the Grenfell Tower blaze.

The drastic measure began when the London Fire Brigade found a number of safety issues inside the blocks during an inspection that was triggered by the discovery they were wrapped in flammable cladding.

People living on the Chalcots estate were woken during the night and told to evacuate their flats, a number of which are owned by private landlords, immediately because they were said to be in imminent danger.

Almost six weeks later, and tenants are now being asked by Camden Council to return to their homes, after claiming that it is safe to do so following urgent works, which were carried out to address the fire brigade’s concerns.

But there are still ongoing fears about the external cladding and need for internal repairs, including gas pipes, and this largely explains why many residents have refused to go back or have done so reluctantly while not feeling confident in their safety.

Now a group of residents, who remain concerned over safety at the tower blocks in Swiss Cottage, largely because there have still been no ‘independent’ reports published by Camden Council to show that the towers are now safe, have decided to appoint a legal firm to help commission their own report by surveyors.

Robert Kukaj and Sasha Martin, whose families reside in the towers, set up the online donation page, which has a target of raising £3,000. Any surplus funds will be donated to Great Ormond Street Hospital.

Kukaj said: “We as residents feel that it is not safe to return to our flats as we have seen evidence that these works have not been done properly and to the right standard.

“We also felt that these works being signed off by different local authorities does not provide the impartiality that you would have if it was done by an approved inspector with no ties to any local authority or government.

“It is a lot to ask for granted but worth every penny to put people’s minds at ease and to make sure we are not living in death traps.”

He said the majority of the costs would be covered by legal aid, but the remainder of the costs of the two-day inspection needed to be raised.

A Camden Council spokesman told the press that the council has been working alongside residents to reassure them of the safety of the buildings following London Fire Brigade advice and that it now has a package of support for moving home.

He commented: “We want to again reassure residents that building control requirements have been met and independently checked. Additionally, and crucially, the London Fire Brigade have checked the works and are happy that we have met the required standard. We know this has been a difficult time for residents and we will continue to make one to one support and advice available.”

The government last week launched an independent review of building regulations after tests showed that at least 82 residential high-rises use a combination of insulation and cladding that does not meet fire safety standards, while many private landlords are now taking measures to check the fire safety of their own buy-to-let properties in the wake of the Grenfell Tower fire.

The government has released the first tranche of an estimated £400m...