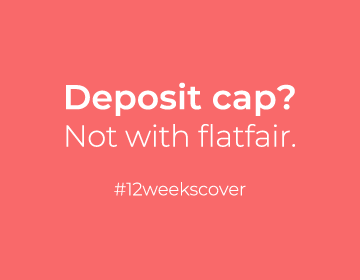 The next UK government must do more to reduce the burden on private tenants by reducing upfront costs associated with renting a new property, according to deposit alternative platform flatfair.

The fintech platform is alarmed after the latest data reveals that tenants have suffered intense rent increases this year, owed in part to the introduction of the tenant fees ban that came into force in June.

According to the latest figures from ARLA Propertymark, the number of tenants experiencing rent hikes hit a record high this year, rising from an average of 26% each month in 2018, to 46% on average this year.

The increase is owed primarily to the impact of the tenant fees ban, the trade body for letting agents said.

David Cox, chief executive, ARLA Propertymark, said: “It’s no surprise that tenants have suffered intense rent increases this year. We predicted this would happen as soon as the government announced a ban on tenant fees, and since the ban came into force in June, rents costs have continued to spiral.”

Franz Doerr, CEO of flatfair, which lets tenants pay a one off membership equivalent to a week's rent rather than pay a deposit, while also offering landlords up to 12 weeks' rent worth of protection for damages, is now calling on the next government to help renters.

Doerr commented: “As a record number of tenants experienced rent hikes this year, it is clear that both the rental sector and the next government need to prioritise finding ways to reduce the burden on tenants.

“Thankfully, the technology we have today allows us to remove the need for a deposit, allowing tenants to rent in the same way they would check into a hotel.

“Our product has proven that this is possible while protecting landlords far more than a traditional deposit would, making it a win-win scenario for everyone involved. As more people in the UK are in rental accommodation, it is crucial that we help to move the sector towards a future that is fairer, more transparent, and more accessible."

‘Boost’ for landlords as new product adds on up to six week’s damage protection ...

Boost, a new product, has been launched by payment technology company flatfair.  The...

The government puts plans to scrap Section 21 on hold ...

The government has indicated that it will not scrap Section 21...

What will the government’s stamp duty holiday mean for BTL landlords? ...

The chancellor Rishi Sunak is expected to announce tomorrow changes to the...