When you rent a property to a tenant, you are required to pay tax on any profit you make from rental income that is not covered by your personal allowance, which is set at £12,500 for the 2019-2020 tax year, and yet fresh research conducted by accountancy firm UHY Hacker Young has found that many buy-to-let landlords are avoiding paying rental income tax.

In Nottingham (NG postcode area), for instance, the percentage of landlords admitting to not paying tax on their rental income has increased 245% over the past year, according to the study.

On a list of the highest concentration areas across the UK of buy-to-let landlords admitting to rental income tax avoidance, Nottingham is ranked third, following Leicester at second and Birmingham in first place.

Simon Browning, partner in charge of UHY’s Nottingham office, said: “Nottingham’s buy-to-let market has continued to soar in recent years, making it a popular choice for investors with the rental yields achieved some of the highest in the country.

“However, these figures show that HMRC sees the buy-to-let market as a source of hundreds of millions of pounds of unpaid tax. The amounts collected just from landlords coming in from the cold suggests they may not be too far wrong with those estimates.

“Buy-to-let landlords have been prosecuted and jailed both for under declaring rental income and for failing to pay CGT on the sale of buy-to-let properties. Considering the risks of big fines and criminal prosecutions landlords are doing the right thing by coming forward to HMRC and declaring unpaid taxes.

“While establishing and prosecuting a tax fraud involves a lot of hard work by HMRC they’ve made it clear that this is a route they will go down. The paper trail that exists with most property lettings makes it relatively simple for HMRC to show when tax is not being paid.” 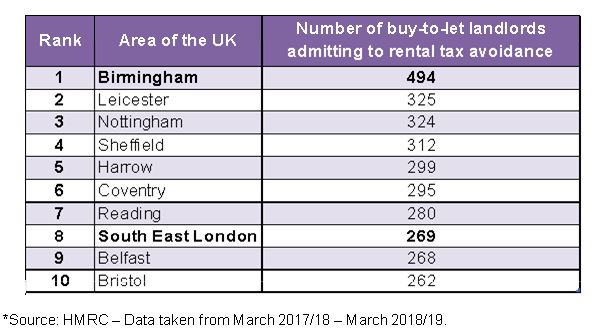