Top Ten Best Places to Invest in Property in the UK 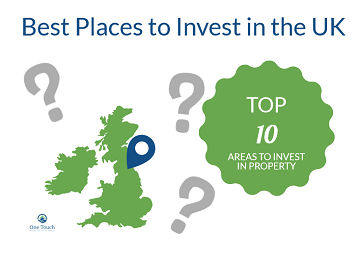 The North West of England tops the charts as the best place to invest for high annual rental yields, whereas the South East benefits from huge increases in house prices

Despite George Osborne announcing an additional 3% Stamp Duty to be levied on the purchase of additional properties in his 2016 Budget, investing in property can still be profitable, and here are the most lucrative areas to invest.

The North West of England topped the tables as the most lucrative area to invest in property to achieve high rental yields; and with four renters vying for each property, there’s no shortage of demand. Conversely, those who have invested in the South East and London would benefit from the increase in house prices. 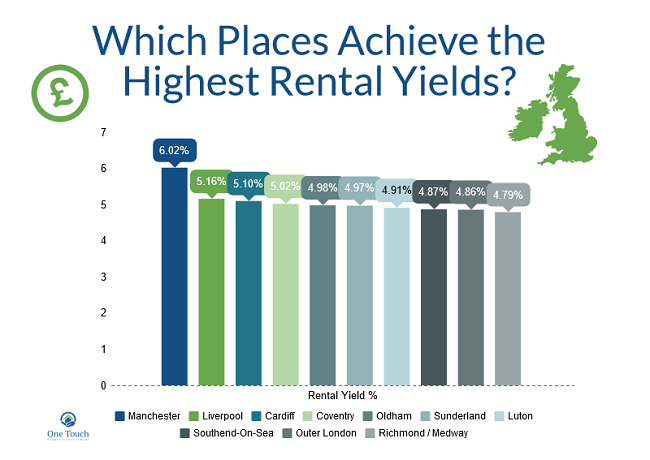 More specifically, Manchester tops the poll as the best place to invest if you wish to achieve high rental yields. The yield is calculated by taking into account the average monthly rent and working it out as a percentage of the property’s market price. The average rental yield in Manchester is 6.02% and Liverpool came in a close second. The full list is below:

Manchester tops the table as the best place to invest to achieve high rental yields. Not only can investors achieve high rental yields here, there is also a sizeable rental sector. 26.85% of the housing stock is privately rented, which is above the national average of 18% and assures investors that there will be a strong demand for property. Manchester is also home to 60% more 25-29 year olds (those most likely to rent) than anywhere else in the UK.

Investors can also take advantage of rising house prices in Salford, Greater Manchester. This is partly due to the influx of businesses setting up offices in the town, as Salford’s MediaCityUK became the headquarters of BBC Sport and CBBC in 2011. Property investments such as the Viewpoint in Salford consists of student, post graduate and professional accommodation that would be ideal for those attending the University of Salford or those who work in Salford or neighbouring Manchester.

The Best Northern Cities to Invest in Property Outside of Manchester

Liverpool comes in a close second on the table of the best places to invest in property to achieve high rental yields. Liverpool is undergoing several regeneration schemes focusing on Liverpool docks and housing that upon completion will only raise house prices in the area as it increases in desirability. Liverpool’s L1 postcode in particular is on the up, still remaining affordable but having experienced a rise in house prices of 41.2%.

Liverpool’s huge student population means that there is always a requirement for accommodation, and this coupled with low house prices and high rental values allows investors to maximize their yields. 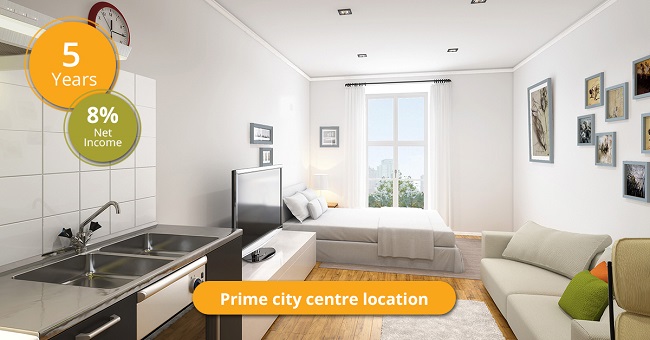 Student accommodation investments in Liverpool such as Pembroke Studios are particularly good attractive, guaranteeing immediate income, zero development risk and 8% net rental income guaranteed for 5 years. The development’s proximity to several universities including Liverpool John Moores and the University of Liverpool only enhances its appeal to Liverpool’s 50,000-strong student population.

Sheffield is also forecasted to experience some of the highest rental yield growth over the coming years. This can partly be attributed to a shortage of high quality housing stock in the city, but also the city has been named the second “northern powerhouse”; a scheme to increase investment and devolve powers to northern towns and cities such as Hull, Manchester and Sheffield. Traditionally a steel manufacturing city, Sheffield’s focus has turned towards tech and it is now the 9th largest tech centre in the country. Other tech cities include London and Cambridge, however the cost of living in both is becoming increasingly out of reach for most, so Sheffield is seen as a suitable alternative by many. 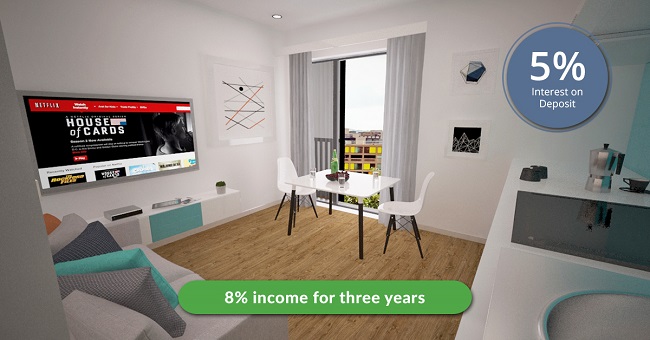 Sheffield’s growth makes it a viable city for buy-to-let property investment. Although Sheffield didn’t officially make the top ten best places to invest in property in the UK, the S1 postcode achieves some of the highest gross yields in the whole of the UK. Investors can buy a property in the S1 postcode for under £70,000 and generate gross yields of up to 11%. This, coupled with the growing tech industry in the city means that demand for housing can only rise.

Cities such as Cardiff and Coventry also command excellent rental yields, due to relatively low property prices. In particular, Cardiff has seen finance and business services employment growth of 4.4%, outstripping the rest of Wales and the UK as a whole. These improving economic conditions in Cardiff mean that many anticipate a rise in demand for rental properties in the area. With businesses and investors finally seeing the benefits in cities other than London, it is no surprise that property in these areas is increasingly becoming more desirable.

The South East tops the tables when it comes to capital gains, with property investments in inner London generating an annualised return of 7.9% and properties in Cambridge generating 5.99%. With regards to rental yields, when compared to the North, the South East performs poorly and nine out of ten of the worst performing postcodes are based in the South East and London. This is mainly due to soaring house prices, which of course is good to generate high capital gains, but negatively affects rental yield.

So, Where Should Investors Buy Property?

Investors may find it easier and safer to invest in the North where house prices are relatively low, rather than take a risk with property investments in the South East, where house prices are high. Although properties in London and the South East generate a much higher annualised return, many investors find that they do not want to invest so much money into a property as the risk is much higher. To generate a steady income with lower risk, we recommend considering places such as Manchester, Liverpool and Sheffield to invest in property. The benefit of investing in Manchester and Liverpool in particular is that even though property prices are currently low, they are predicted to experience the biggest growth in house prices due to graduates deciding to stay after completing their education. As mentioned previously, the L1 postcode in Liverpool is home to some of the largest property price increases in the country, experiencing a 41.2% growth in the last year alone. Average property prices in the area went from £85,000 between December 2011 and November 2014 to £120,000 for the year to November 2015. Manchester, Liverpool and Sheffield are still affordable but we advise early investment to benefit from the predicted rise in house prices.