By Barry Jones
< Back 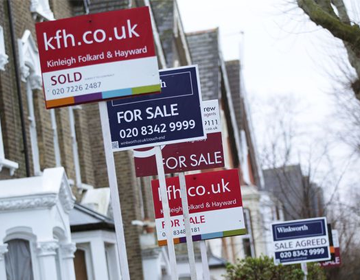 There has been a sharp increase in house prices in the last 12 months as supply fails to keep up with demand. According to Halifax’s latest house price index for April, the average cost of a home in the UK is at a record high of £196,412. In London, prices are now 32% higher than they were at their pre-financial crisis peak.

However, this rise in house prices is putting off (or in some cases preventing) would-be buyers from investing in property. Sellers want to get as much for their house as possible, but high house prices mean there are not enough buyers willing to commit to an investment, particularly in major urban areas. Many experts believe this has led to market stagnation – where not enough people are buying and not enough people are selling, either.

This problem is most pronounced in the capital, where the average house price now stands at £514,000. With values in London appearing to operate on a whole other level to the rest of the country, prospective buyers - in particular young professionals - are finding it completely unaffordable to buy there. An influx of wealthy overseas investors since 2008 have helped prices to rocket, while gentrification of areas like Brixton, Streatham, Hackney and Peckham has seen even these traditionally affordable areas go out of the reach of younger workers.

In only three major cities – Birmingham, Leeds and Norwich – would people be financially better off living in rather than commuting daily. In London, the average cost to a commuter is an estimated £1,923, however to live in the city centre the average rent per month would set you back around £2,722– a saving of £798.60 for those choosing to live outside the city. In Manchester, Cardiff and Edinburgh, people would also save more by moving out and commuting in.

Millions filing out to suburbia for cheaper accommodation could lead to its own set of problems, though, with extra demand causing house prices in these areas to inflate. Data released by the Land Registry showed prices in suburban hotspots growing quicker than in many cities and rural towns. Places like Reading, Slough, Milton Keynes, Southend and Bracknell Forest – with cheaper housing and good transport links to London - are all attractive propositions to those looking to escape the city. All have seen house prices performing strongly in the last year.

There is a fear, however, that the rise in popularity of commuter towns will result in a vicious cycle whereby people swarm to an area and push house prices up at a rapid rate, leading to an exodus to another suburban hotspot, where the same thing happens. In other words, the issue of soaring house prices never gets solved – it just spreads out from major cities to the commuter belt.

More than anything, this would appear to be a supply issue. UK house prices have hit record highs over the last five years and are expected to beat these in the next five years to come. It’s been estimated that 245,000 new homes need to be built a year, but this figure wasn’t even close to being met last year – with the government only building 141,000. If house prices are to come down, levels of supply and demand will need to be brought much closer together.

As things stand, it doesn’t look like things are going to get any easier for those looking to buy.